I have written a number of guides to over 30 cities around the world (which can be found on my blog, details below) but here are my top 5 tips to running abroad, wherever you are.

Number one tip – Make sure you know on which side of the road it travels!

There is nothing worse than running up to a crossing, looking left, stepping out only to hear the horn and breaks of a car narrowly avoiding you on your right!

Footpaths vary greatly from country to country too. For example a lot of roads in Arab countries do not have any, whereas many busier roads around big cities such as Melbourne and Paris have strict areas for cyclists and pedestrians which you must stick to and should for safety reasons.

In USA, jaywalking (crossing the road without waiting for a green man signal) is against the law, so bear that in mind when you start skipping across roads without stopping. You don’t want to find yourself finishing your run with a cool down in the slammer!

My advice would be to stick to the footpaths and rivers where possible just to be safe.

2. Stick to your route

Sure it is great to have lots of different varying runs to mix up your training, but you do not want to get lost, especially if you are on business when time is a factor.

Explaining to your boss, or even worse your wife/girlfriend that you missed your romantic breakfast or business meeting because you over-did your 10k is not going to go down well!

Try to stick to areas of interest and landmarks so you have points of reference. Most tourist attractions will have information booths or signposts, usually in numerous languages, so by staying close to them help us at hand should you lose your way or pull a hammy!

It is also very wise to choose an ‘out and back route’ which although not the most exciting, you know you will not get lost or end up running 20 miles instead of 5 because you got lost!

Once you find a good route, stick to it each time you run and save your experimental trails and cross country for when you get home!

Another factor that varies more from country to country then you would think. The wrong running clothing could lead to anything from sunburn to cold or even to upsetting the locals.

First of all when you arrive (or ideally before you leave home) be sure to find out the weather forecast for your stay.

The last thing you want to do is pack shorts and vests only to realise the temperature is single figures all week!

In Muslim countries and some parts of Asia (China especially) you will need to be covered up whatever the weather. Shorts and a t-shirt are mainly okay for men but for women you may most likely need either trousers, a long sleeve top, or both.

USA, South America and Australasia are very relaxed, so you can wear whatever you want or nothing at all (almost anyway) and in a lot of places such as Miami and California, it can seem like you are inside a Men’s Health magazine with the amount of flesh on show!

If travelling to Europe between September and April, temperatures can vary from near freezing to well in the 20s from week to week, so best to pack a cold weather top and hat/gloves just in case.

This is critically important for many reasons such as safety, weather and congestion.

Get the time of your run and not only could you get extremely hot/cold, but you could also be putting yourself in danger.

In South America for example, most definitely run during daylight hours. Crime rates are on the whole decreasing but as a gringo (the Brazilian term for tourist) you will be more of a target than the locals.

I had the pleasure of being pick pocketed in broad daylight in Rio so if you were to run at night and wander down the wrong street, it could be a potentially dangerous situation.

In the Gulf, it is important to run at certain times simply due to the sheer heat during the middle of the day. Temperatures will consistently top mid 40Cs in Summer so be sure to run early in the morning or at night in more developed areas.

In a lot of European countries, shops and businesses do not usually open until 10am (lazy) so if you run between 8-10, there will be lots of other runners around.

In France in particular, you see lots of runners in groups of four plus so navigating your way around can be tricky, so might want to run in the evening (when traffic is also quieter usually).

In big cities as mentioned above traffic can be a nightmare so it goes without saying try to avoid rush hour or if you can’t, try to find a park.

Nobody likes running with lots of stuff, but here is my list of the 3 essentials that you should carry with you wherever you are running

1. Hotel/Hostel Business Card & Key – A lot of places will ask you to leave your key reception when you leave so not always, if they do take a business card. These are great because most will have the name, address and phone number of the hotel. You can then use this to ask for directions or give to a taxi driver should you get lost.

2. Money – Small amount of money, enough for a taxi and a drink should you get lost. In note form obviously, don’t go emptying your piggy bank of pennies. I usually wrap the note around my phone.

3. Phone – At the risk of sounding like an Apple salesman, an iPhone is perfect for running abroad (other smart phones are available). As well as an mp3 player, you also have a map GPS system, a stopwatch, Nike+ to record your run data, the internet, oh and of course a phone! It will save you from having to carry multiple things on you.

Good luck, stay safe and enjoy your run. And lastly, don’t leave your shoes at home! 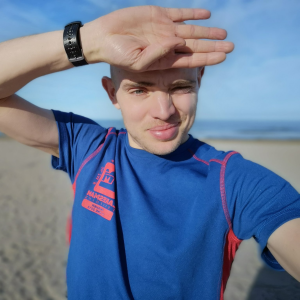