Ellie Simpson on her way to setting a new world record in wet conditions in Manchester. Photo: Melissa Gresswell/Lissgphotography

“I always believed, I always dreamed. Now my craziest of dreams has come true!” These were the words of Britain’s Ellie Simpson when it was announced that RaceRunning had officially been recognised by the International Paralympic Committee.

As a result, when the 2019 World Para Athletics Championships take place in Dubai this November, they will feature the discipline for the first time.

If selected, Simpson would go to the Middle East in good form, having been one of three athletes who set new world records in soaking conditions at the England Athletics Senior Championships in Manchester. Her 200m time of 39.62 seconds beat the previous best held by Kayleigh Haggo, who in turn clocked a 100m record of 18.97. Fellow Scot Gavin Drysdale did the same in the men’s race with a time of 17.26.

Largely involving athletes with cerebral palsy, RaceRunning has seen huge growth in the last few years and made a second appearance at the England Athletics Senior Championships over the weekend following its debut in 2018.

You can watch the action from Manchester here and results can be found on this page.

RaceRunning is an international disability sport designed for people with neurological conditions such as cerebral palsy. It uses a custom-built three-wheeled frame, where the runner is supported by a saddle and can lean against a chest support. There are no pedals and athletes propel themselves forward using their feet, with hands or arms used to steer. 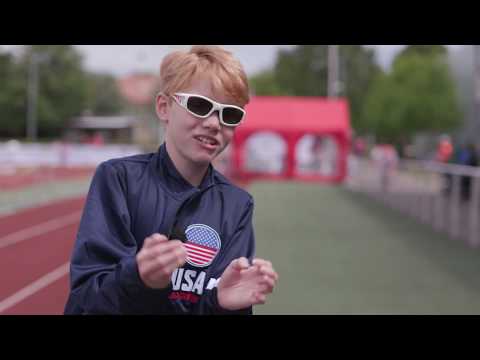 As you may know, Paralympic sport has many classifications based on things like visual impairment, co-ordination and movement. In this instance, there are three categories, with numbers 1 to 3  in order of most to least impairment. However, at the 2019 World Championships, RR2 and RR3 are combined and athletes will compete against each other.

RR2 – Typically athletes with limited range of motion or co-ordination along with limited stride effectiveness.

At the England Championships, it will be a first across the line system for gold, silver and bronze for RaceRunning, with heats and seeded A and B finals for all para athletes. Ambulant and wheelchair races will be calculated on point scores based on their respective classifications.

What are athletes aiming for?

Selectors from the governing body British Athletics say they will take up to two male and two female athletes. Naturally, entry standards of 24 seconds for men and 25.50 for women are paramount, but factors like current form and fitness and head-to-head results are likely to also be considered.

Many Brits were successful at both the Cerebral Palsy (CPISRA) World Games in Spain and the European Championships in Germany last year. The latter featured the sport for the first time and there is hope that a place on the global stage will lead to Paralympic Games inclusion in 2024.

Who is good at it?

Great Britain were first and second in both the men’s and women’s 100m at the European Championships.

Around 20 countries take part across distances from 40 to 5000 metres and it has seen particular growth in the UK, Netherlands and Australia in the last few years. It was founded in Denmark and the Danes, along with Norway, Sweden and the United States also boast some top competitors.

RaceRunning returns as the first track action of this evening and it’s 🇬🇧 duo Hannah Dines and Kayleigh Haggo who claim 🥇 and 🥈 in the women’s 100m RR3 #Berlin2018 pic.twitter.com/QelpDAQCJN

When Gavin Drysdale started competing in 2010, he is said to have been the only race runner from Scotland. Now there are more than 100. Gavin, who took European gold in Berlin last year (above), set a new world record and received a huge heroes welcome at his Kyle Academy school in Ayr, Scotland.

Of his continental victory, he said: “I felt like I had already won a gold medal just by being there, so the fact I actually won was amazing!” Gavin has also competed as a wheelchair racer.

19-year-old Rafi Solaiman is the 200m world record holder. The teenager, who took European silver last summer is also a model and took up RaceRunning after he suffered a brain haemorrhage at the age of 12.

Rafi Appeared in a CBBC documentary My Life: Changing the Face of Beauty, in which he told how he refuses to let his disabilities hold him back from succeeding in his career. 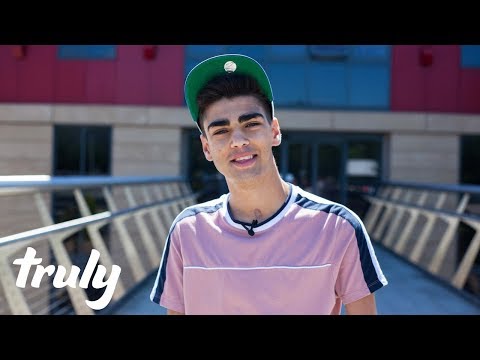 Kayleigh Haggo is another inspirational figure who has broken records in RaceRunning, swimming and club throw, holding the fastest ever RR2 times for 100, 200, 400 and 800m.

“I started RaceRunning at the age of 12 then had four years out to focus on swimming, but it’s great being back. It’s fast, it’s challenging, and I love the sense of freedom and independence that RaceRunning gives,” she told Aberdeen and Grampian Chamber of Commerce. Kayleigh mentions in her Twitter biography that she is also a swimming teacher and a disability sport inclusion worker.

Haggo came second to Hannah Dines at the Europeans in 2018.  Dines competed at the 2016 Paralympic Games in Rio de Janeiro as a cyclist, only three years after getting involved in sport.

She describes herself candidly in her blog as a “three-wheeling, free wheeling couch-potato convert with spastic diplegia and a BSc Hons in Physiological Sciences.” Dines is aiming to cycle at Tokyo 2020, and has recently campaigned for research and better saddles for female cyclists following persistent injury which required surgery.

No PB’s this time but yet another great day RaceRunning! ❤️ pic.twitter.com/XhAN09wGDB

Ellie Simpson won titles over 100m and 200m at the Cerebral Palsy World Games in Spain last August, following up her double from 2015. In between topping the podium, she received an award from the Prime Minister Theresa May for setting up CP Teens a charity working to build a community that supports young people with cerebral palsy.

“When I first saw a RaceRunner at an athletics competition I was amazed. I tried it out, and thought it was so great that I wanted to offer it to other people, so I set up England’s first RaceRunning club at the English Institute of Sport,” Ellie said in an interview with Sheffield Hallam University.

Matthew Humphreys who won World Games 400m gold, has also been known to inspire others. The 21-year-old is a qualified Level 2 athletics coach who gives talks and motivational speeches, a highlight being his involvement with BBC Children in Need.

Donations helped Charlie Denman to compete in Spain, where her 400m gold followed 100m silver and a pair of bronze medals. The success preceded the Gloucestershire teenager picking up GCSE results. 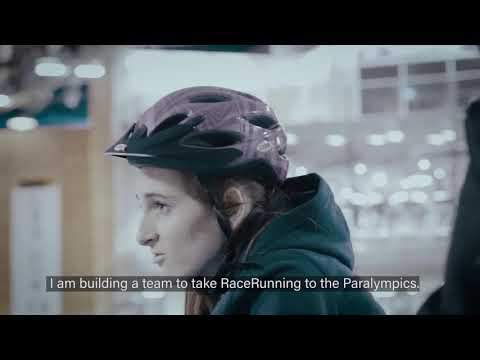 Thomas Talbot is the under-16 world record holder for 100m, who on a number of occasions has done the quadruple – winning national age group championships over 100m, 200m, 400m and 800m. He had major hip surgery in January 2017 before a return in September to take gold over all four distances.

Fellow 15-year-old Orla Conneely impressed by winning 400m bronze at the World Games against senior opposition. Earlier this year, she was rewarded by being crowned Young Disabled Sportsperson of the Year by her local Chesterfield Schools Sport Partnership.

These great stories of triumph and fighting to be included are no stranger to Thomas Talbot’s mum Ali, who is the Chief Executive of Cerebral Palsy Sport. “We have supported this development and hope that having viewers see it streamed live and it being included in such a high-profile event will inspire others that have probably been excluded or faced barriers to their inclusion in sport. They will transfer from a passive spectator to an active runner.”

Ali also says that all the athletes will have been affected by the sad news this week that respected RaceRunning coach Janice Eaglesham passed away. Gavin Drysdale was among many who posted tributes on social media as he wrote, “I couldn’t have asked for a better person to guide me through the experiences of becoming an international athlete.”

The England Athletics Senior Championships featured a wide programme of disability events that also included ambulant and wheelchair races, with the likes of Paralympic champion Kadeena Cox and European medallists Stefanie Reid and Laura Sugar featuring. Young athletes used the competition as a warm-up for the World Para Athletics Junior Championships in Switzerland next month. Olympic Champion Joshua Cheptegei to compete over 10km in Cannes

A British team of 12 selected for the European Throwing Cup