In the last edition of the Commonwealth Games in Glasgow four years ago, there was no race walk for Erika Kelly to take part in. Then again, in 2014, she had yet to try the event.

“Four years ago, I didn’t know what it was”, says Erika, who is now one of Britain’s best and one of three athletes selected for the Isle of Man team heading to Australia this spring.

Her story is all the more impressive for a number of reasons. Firstly, because of the resources available on the island. “I have one guy to help me do the speed work, but I don’t really have anyone to train with. It can be lonely, so you have to truly want to do it and enjoy it.”

“There are a lot of walkers on the Isle of Man – there’s a challenge where you have 24 hours to walk around the island – which is 85 miles!” A unique challenge, but not one the 25-year-old UK Inter-Counties Champion would shy away from.

That brings us nicely onto the story of how she took up race walking. “I did a little event one evening. There was a centurion, where you had to do 100 miles around a lap and I’m the sort of person that cant sit still, so I did the supporting event to that. Afterwards, my now coach got in touch and said ‘would you be interested in taking up athletics?’. I carried on running really badly, then I basically tried race walking because I turned up to the wrong session!” 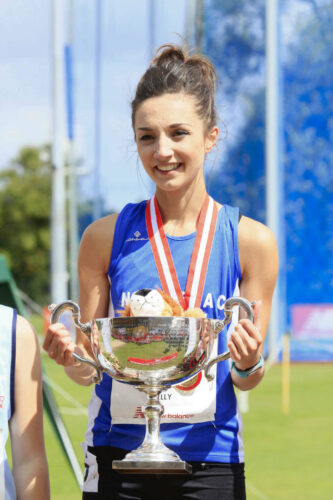 In some ways it was an unlikely turn of events, but with determination, fuelled by enjoyment of what she does, the Northern AC athlete kept going. “I think I’ve always been average at doing sport. I wasn’t given a proper chance at school – so to get to where I am now through purely enjoying it – I am really proud.”

Things are going well in 2018. Erika followed up her silver medal at the British Championships last summer with bronze at the indoor equivalent earlier this month. In doing so, she was also three minutes faster than the time of 17 minutes she managed for 3000m in 2015.

There’s one more thing that might surprise you. Erika has a degenerative eye condition called Lattice Corneal Dystrophy, which she was diagnosed with at the age of 14. In trying to raise awareness on social media, she says her sight has deteriorated over the last decade, but is keen to stress that it shouldn’t hold anyone back.

“I don’t fit the stereotype of a blind person. People don’t know unless I tell them. The only time they know is when I accidentally ignore them in the street or at the track or they see me squinting. Don’t let it be a barrier.”

Selection for a major international tournament seems like the ultimate reward for her hard work. Finding out she was heading to the Gold Coast was a dream come true. “I knew there was a meeting (about selection). It was really exciting. It was a bit disappointing at first that one of my team mates (400 and 800m runner Joe Reid) didn’t get picked, but then the Isle of Man was awarded an extra place and now he’s going too!” 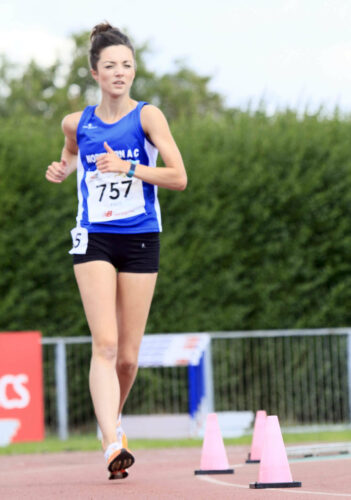 “This year is going extremely well, a lot better than I expected,” says Erika, who has certainly benefitted from an increased spotlight on race walking since Britain’s Tom Bosworth started breaking multiple records. “Tom’s done an amazing job of getting it noticed, it’s definitely gone up since he’s pushed it”. Kelly took time off work last year to go and train at the National Centre for Race Walking in Leeds where top athletes like Bosworth – who was sixth at the Rio Olympics – are based.

The event hasn’t always offered gender equality though. Only a few weeks before the IAAF World Championship in London last year were plans for a women’s race walk announced, leaving those selected with little time to prepare.

President Sebastian Coe described it as “a last-minute decision based upon the request of a small group of athletes” and said it was needed “to ensure the long-term credibility of the World Championships.” Erika believes it was better late than never. “It’s what you’re training for all the time, so the athletes that went were ready for it.”

The idea of ‘being ready’ is both a mental and a physical thing. For all the focus on personal improvement and the obsession with times and distances in athletics, it’s often said that top athletes need to make the most of time away from track and field to really flourish.

Olympic pole vault champion Katerina Stefanidi recently told us that her husband and coach has never needed to motivate her, but has taught her to relax and explore other interests.

This is where Erika Kelly – a professional harpist – comes into her own. Her path into music shares a similar curiosity with how she started athletics. “It started in primary school, I saw this tiny harp in the corner of the gym and I approached the music teacher, who said i could take it home!”

I started playing away and was able to learn little nursery rhymes. Then eventually I improved and began to play in a folk group and I uploaded a few videos to YouTube. It 100 per cent relaxes me. It is a different side to me – it is refreshing and completely different to sport. I play by ear because I can’t read music!”

From a physical point of view, race walking is a demanding event. Major competitions routinely require entrants to complete 20 or 50 kilometres and athletes are under close scrutiny as they try and maintain their technique. “I’ve managed to get sponsorship with the local sport group on the Isle of Man – through that you get strength and conditioning training – that’s been a game-changer.”

Looking ahead and thinking about what more she can achieve, it seems like Erika’s ready to take everything in her stride, quite literally. “I’m a begginer, I want to race more over 20K, I want to break a hundred minutes over that distance, and I’d like to represent England again. Maybe getting into the World Championships, we’ll see!

“Practising is a massive thing and I’m constantly being followed on a bicycle! We do lots of video analysis to see if I’m landing too flat on my foot rather than on my heel – your core and glutes need to be strongest – I don’t know about others but my core definitely tires first! Practice makes perfect.”