2003 World 100m Champion Kim Collins considers field events to be paving the way for a focus switch away from the sprints.

‘Sprinting’s not what it used to be. It used to be a bunch of lions in a cage trying to eat each other’ Collins said.

The evergreen sprinter, now 39, has run under 10 seconds twice this year, making it an impressive seventh season running 9.9s. And there seems to be some substance to what Collins suggests, with Bolt back in action at the London Anniversary Games and rivals Justin Gatlin and Asafa Powell both absent.

This year’s exciting sprint rivalry consists of unbeaten Justin Gatlin and world-record holder Usain Bolt, who have not raced this season, with Tyson Gay and Asafa Powell in an interesting sub-plot.

Gatlin is the fastest man over 100m and 200m this year. He is unbeaten since 2013 and currently holds the four fastest times of the year, running 9.74-78 to show remarkable consistency. Bolt sits 62nd on the IAAF list with a modest, early season 10.13 into a headwind, but will undoubtedly rise to the occasion if fit next month for the World Championships.

Asafa Powell and Tyson Gay have returned this season with 9.81 and 9.87 respectively and will surely feature in the 100m final in Beijing.

To compare this season with previous year’s sprint rivalries, an obvious choice would be Ben Johnson and Carl Lewis. In what was a memorably hostile rivalry, Lewis and Johnson’s dislike for each other was evident both on and off the track. At the Seoul Olympics 1988, in what is sometimes referred to ‘as the race that shocked the world’, Ben Johnson overthrew reigning Olympic Champion Lewis, running 9.79s before his imminent ban.

In 1997, after a long dispute over who was the fastest man in the world, Michael Johnson and Donovan Bailey raced over 150m in what was an exhibition-style race that attracted huge media attention. Bailey was 100m Olympic Champion and beat 200m Olympic Champion Johnson, who pulled up with an injury. Perhaps Collins believes we need more of this type of rivalry – the trash talk, the media build up, the conflict between two sprinting greats, choosing to fearlessly go head-to-head.

2015 has the prospect of producing a sprint rivalry to beat all that have come before it, with out-of-form people’s favourite Bolt and dominant but universally unpopular Justin Gatlin.

Collins suggests it’s time to forgive Gatlin, stating ‘If there’s a problem with him, let WADA do its job… It’s unfair to talk about his past. We have murderers that come out of prison and be put back into society and people forgive and forget and people move on.’

It seems whatever the outcome concerning Gatlin’s forgiveness or subsequent lack of, we have a story this season with a greater background than ever before. This rivalry is a comeback tale, but also one with exciting characters – we have both a hero and a villain in the form of two very different sprinters who look likely to become the two fastest men of all time. 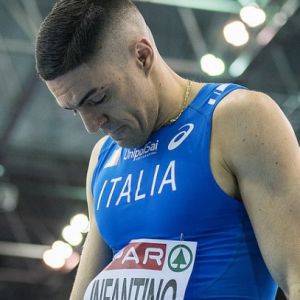